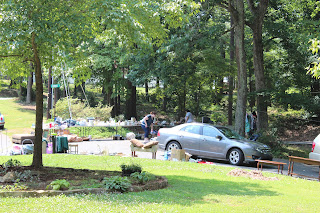 When I looked out the window early Saturday morning, I noticed my neighbor had all her treasures laid out on long tables. I also noticed there was already a crowd too. So… I decided to take a cup of coffee with me while I ‘just look’ around in order to be neighborly, of course. Taking a cup of coffee was also supposed to distract me from getting anything. Yeah…right….

Sabrina said they were downsizing for a move they were planning for the future. She said she had way too much stuff tucked away so she was going to sell it off little by little. Then the task would not be so overwhelming.

People were steadily filing in and out. Some took a brisk walk through looking only for particular items. Others checked for brand names, signatures and dates hoping to find a prize to sell later I supposed. Each had their purpose for coming. The main thing for my friend was that it was selling, no matter the reason.

When I came back home, I started thinking about yard sales and their purpose.  I came up with a couple of important views.

Repurpose items for farther use

Yard sales are a great for unloading items you no longer need but someone else can repurpose to meet a need they have. With the economy the way it is, people have to concentrate on getting good deals.  This type of shopping is a great way to get things you need or even want inexpensively. I have also heard of people who have lost everything through a fire/flood using yard sales to replace basic necessities. And…in the end, isn’t helping others what life should be about?

Reconnect our hearts with God

Let’s face it. We live in a world of distractions. It is hard to say no to the things that are so readily available and tantalizing to our wants and wishes in life. We just have to have it! But then, after we made the purchase, we realize that we didn’t really need or want the item as badly as we once thought. The treasures we sought after didn’t live up to our expectations and we are left empty. Our reasons for the purchase in the first place were misguided because our hearts were in the wrong place. What we really needed was to feel the need with more of God.

Yard Sales help us reevaluate where we want our focus to be for the future. Jesus once said, “Where your treasure is, there will your heart be also.” (Matthew 6:21) Jesus was not against us having our hearts desires but He was against them replacing our loyalty and obedience to Him. When we seek God’s counsel, He will advise us on the timing of all things so what we purchase does not throw us off balance.

Are you holding on to more than you need? Is it time to change your focus? Take the challenge to cleanse yourself and your house of the extra you don’t want or need. It is work! But the joy of helping someone else could out weight the chore and put a song in your heart once more.

By the way, I did make this one small purchase. I felt called to help my neighbor. : )
Posted by Mary Jane at 6:01 PM 4 comments: 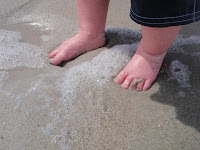 There is a childlike balancing game I like to play when I go to the beach. You stand in the sand at the water’s edge so the waves can pass over your feet. Each time a wave comes and goes the water takes sand with it until you finally lose your balance. Last one standing without repositioning their feet wins.

Recently, when I went to the beach, I played this game by myself. As I stood there and felt the sand melt away, the Holy Spirit brought this verse to mind: 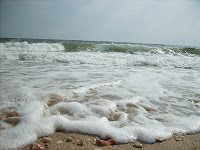 What are you trying to teach me Lord? When I returned home, I began studying about sand and how rocks are formed. Then, I began to see what the lesson was about.

In the natural, sand is made up of tiny grains of minerals. By itself, sand does not have the properties to stick together and it is so light it can be easily moved by water or the wind.

On the other hand, a solid metamorphic rock like Jesus is referring to in the passage is made up of unlimited sand-type particles that have been “morphed” (transformed) into one solid piece. The sand in metamorphic rocks have been through heat and pressure to form a solid impenetrateable structure.

In the spiritual sense, the sand represents the principles God is teaching us out of His Word. When we do not connect and protect the lessons we are learning, they can easily slip away and we can become off balanced. Without steps to foster change, we can end up falling to the ground with a bang. 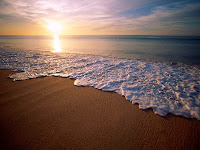 However, if we learn the validity of the scriptures one by one through the pressure of the trials we face daily, then the knowledge base built from these experiences will form a solid impenetrateable rock that cannot be destroyed.

Rule of Thumb:
If you can leave your footprints in your foundation,
then it is not solid yet.

So...how is your foundation coming along? Are you “connecting the dots” and forming a solid base on which to stand? Forming a foundation takes time and effort to make it strong and our purposes have to be spiritually motivated. But, if you will remain faithful to the process, then nothing will be able to destroy the authority you stand on.

…upon this rock I will build My church;
and the gates of Hades will not overpower it.

God is thinking about and providing for your needs way before you even realize you will need anything. This was brought to my attention recently when I bought my new home. I was truly amazed.


Before I decided to buy the house, I went over to look at it many times. Judy was the one who met me there on each occasion. She was very friendly as she told me everything about the house I would need to know to make my final decision. At one of the visits, she began to tell me more about her in-laws who had built and lived in the house for over 20 years.

“Irene, my mother-in-law, died in the back bedroom about 18 years ago,” she said.

“Oh really.” I said with curiosity, “What year?”

“What month?” I said with more curiosity  than before.

“Wow…My husband died in November of the same year!” I said with surprise.

Moments later, the Lord spoke to my heart,


“Even before your husband died, I was preparing a place for you.”

From those few words, I was lifted to a whole new level of love for the Father Himself as well as a new level of knowledge about His loving care. He had saved this property for me all those years until I was ready to receive it. I was blown away. Seeing God’s love and care manifested in this way was humbling. Quietly, I headed for the master bedroom, fell on my knees and cried with thankfulness. He had not abandoned me while I was in the desert learning obedience. He had been listening all along to my heart’s desires for a new place when the time came. Now…He was giving me all those collected desires in this one home.

The steps of a good man are ordered by the LORD,
and He delights in his way.

I felt God had used Howard as a guardian over this home for the twelve years it remained empty after he remarried and moved out. Howard just couldn’t let it go. Judy said their family felt like they were saving the house for someone special. Others had tried to buy it but failed. Yet, when they met me, they felt like they had found that special person.

What promises and dreams have you been waiting on God to fulfill? He has not forgotten about you. God is listening and collecting all your heart’s desires whether it seems like it or not.  Though it may tarry wait for it. Then… when He is ready, He will bring them to reality as a precious gift of love.