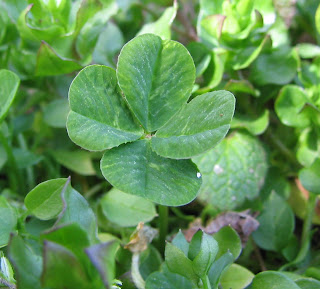 Love, acceptance and forgiveness were the theme words for a retreat I went on recently. By the time the weekend was over, God helped me to act on all three of those words for the healing of ‘Me’.

We sat in one large circle of about 20 chairs. The discussion was lively, thought provoking, and honest. The climax of the process came when we were asked to find a place to relax and allow God to speak to us about whatever He chose so I headed outside. The first thing I notice was a freshly cut tree stump. That’s what I have felt like for along time, I thought, Pruned to the ground with nothing left. I kept walking until I came to a small fenced in playground. The swing looked inviting so I sat down and began to swing. Higher and higher I went until the swing began to hurt my hip joints so I had to stop. Sitting there, I noticed a patch of clover. Wouldn’t it be wonderful if I could find a four-leaf clover? So on my knees I went and began to search. Within seconds like my hand was being guided to the exact spot, I picked a small four-leaf clover out of the bunch. At that point, God’s gentle voice began to speak and the tears began to flow.

God acknowledged that my training of the past several years had cost me everything but He was there to revive and restore all that was stolen. He recognized that I had been wounded but He was going to heal the hurt.  Then He told me the four-leaf clover represented four hearts (Father, Son, Holy Spirit, and me) that had been molded together through His guiding process. I had learned what it meant to be desperate for Him and then to seek Him with my whole heart for direction. Now I was ready to minister to those He would send my way. My promise to Him in response was, if He would continue to show me His way to overcome in the difficult times that were sure to be ahead, I would welcome everyone He sent.  Finally, I felt released to forgive myself.

Have you had a hard time forgiving yourself after a long weary season? Do you need to forgive yourself of the past so you can focus on looking forward?

We all go through seemingly endless times of wilderness where we feel like we have let God down in one way or another because of our hasty decisions or our thoughtless actions. We moan and groan over what we should have done. We continually ask for forgiveness for using human logic instead of His wisdom. Then we wait and wonder if the mess we’ve made will ever end.

Beloved, God redeems everything, if we will trust Him to mature us through it. Nothing is a waste of time. The bad and the ugly can all be redeemed. God will turn what we think is useless trash into an anointed testimony of experience which will inspire others. All He is waiting for is our humility and trust to seek Him.

But without faith it is impossible to please Him: for he that comes to God must believe that He is, and that He is a rewarder of them that diligently seek Him (Hebrews 11:6)
Posted by Mary Jane at 10:50 PM